At least 10 million people globally are stateless – they don’t belong anywhere. A third of which are children. So where do they go?

Thai cave rescue: A backstory of being stateless.

It wasn’t the first time that Adul had a need for escape. Adul is one of the 12 young, Wild Boars footballers who were trapped in a Thai cave last month. But at age 6, he had already escaped a territory in Myanmar known for guerrilla warfare, opium cultivation and methamphetamine trafficking (NY Times).

His story isn’t an original one, with many risking imprisonment while illegally crossing the border between Myanmar and Thailand, hoping to find education and a better future for their children.

Adul, a stateless descendant to an impoverished and illiterate family, acted as an English interpreter for the British divers during their rescue mission. The English he used to communicate back and forth between the divers and his teammates was crucial to their safety. In his Thai school, he is top of his class, and his academic and sporting achievements have earned him free tuition and school meals.

Three of the football players, as well as their coach, are from stateless ethnic minorities, accustomed to slipping across the border to Myanmar one day and returning for a soccer game in Thailand the next (NY Times).

Now, all of the boys, along with their coach, are safely outside of the cave. But for those who are stateless, will they ever truly enjoy freedom? 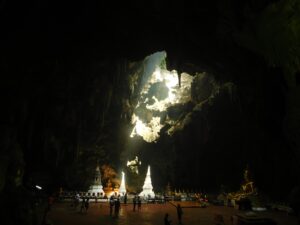 How is nationality decided?

Usually, a nationality is acquired automatically at birth, either that of your parents or the country of which you were born. In some cases, a person must apply to become a national of their country.

To be stateless is to have no nationality. A stateless person is not considered as a national by any country, regardless of where they were born. Some people are born stateless (usually passed down from their parents), but others become stateless.

Statelessness can occur for a variety of reasons. There is often an element of discrimination at play when particular ethnic or religious groups become stateless. Conflicts or gaps within nationality laws means that certain groups can be denied nationality.

The UNHCR says: “Statelessness is often the product of policies that aim to exclude people deemed to be outsiders, notwithstanding their deep ties to a particular country. For example, more than one million people in Myanmar’s Rakhine state are stateless on the basis of the current citizenship law, which provides that only members of certain ethnic groups are eligible for citizenship.”

Statelessness can also occur as the result of gender discrimination. There are 27 states around the world which do not allow women to transfer their nationality onto their children. Meaning that children born out of wedlock or with deceased/unknown fathers risk being refused a national status at birth.

Whatever the cause, it has serious, life-long consequences for the individuals.

What are the consequences of statelessness?

A lack of identity documents will cause problems from birth until death.

A stateless person will likely be denied access to education, healthcare and employment. They are often denied legal marriages as well as legal death certificates and burials. Travelling legally across borders is simply impossible for a stateless person: so they either become trapped within the country that will not accept them or risk breaking the law.

This means that a stateless person will also live a life that is rife with poverty with no way out. They are denied the rights necessary for them to acquire a stable job with fair pay, meaning that they are subject to exploitation. Further to this, the discriminative attitudes towards stateless people will often leave them vulnerable to violence and other rights violations such as human trafficking.

Why should I care?

Statelessness is a global, humanitarian issue.

Everyone — regardless of their legal status—has a right to fundamental conditions of human decency. Open society embraces the notion of human community, to which statelessness is antithetical. All persons have a right to participate in the communities where they live, and stateless persons are denied that right.

Those with a voice should deny a world in which babies are born into life stripped of any rights and all opportunities.

Because a global community where all races, religions, genders and classes can access education and participate in and contribute to the economy, that moves away from prejudice and into more positive and sustainable changes, will ultimately lead to worldwide peace, growth and stability.

Please consider us in your giving 🙂